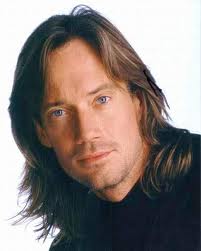 D and I were walking along the cement boardwalk, headed to the pier. It was cloudy and if you looked out to the ocean the water and the sky were striated into different shades of lavender, like a color study from the gods. It was beautiful. I could see a guy up the beach a little swinging from hanging metal rings, one to the other down the row, an urban Tarzan, and then I saw that there was a line of guys waiting to swing. Maybe it was a class. I was excited because I deduced that the pier was the one from The Lost Boys, one of my favorite movies ever. God when I was a kid I wanted to be part of a cool vampire clique so bad. In the 80s the vampires always wore the best clothes: Catherine Deneuve, David Bowie, Kiefer Sutherland, Billy Wirth (my very favorite. I had a college friend who claimed her sister dated him and I shuddered. To think that he and I had shared the same carbon dioxide emissions from my friend’s mouth!). This other time during a summer vacation when I was sixteen my high school best friend and I came out to California for a couple weeks and we went to this amusement park where for like half an hour we befriended this pretty, creepy, prematurely sleazy-looking girl who point blank looked at us and said – I’m a vampire. She was so direct and confident about it that it seemed like it had to be true. That was the same trip where my friend got his ear pierced and then freaked out cuz he suspected he’d done it in the gay ear so he frantically called his mom to see which ear P had pierced in the yearbook cuz I guess P was the arbiter of heterosexuality and sure enough it was the other ear so my friend had his other ear pierced instead, all of which screamed that it wasn’t the right moment to come out of the closet to him.  Anyway I was way ahead of the vampire curve. Or maybe it’s just always been popular and now that I’m old I can finally see that.

Suddenly he walked by us, with two people on either side of him, a man and a woman. He’s tall. His skin was orange, a combination of makeup and tan. He was wearing a robe, some kind of Renaissance-y thing. It’s strange to think that a 70s surfer haircut relegates you to tv/films set in the middle ages or ancient Greece. His features are aggressively strong. These are my EYES, this is my NOSE, these are my CHEEKS. Not unnatural, but there’s a leathery battle against time going on in that face. His name eluded me; I don’t know that I’ve ever watched anything he’s done from start to finish. He was looking intently at the woman I think. They seemed to be his protectors, ushering him from his sudden arrival from another time to the comforts of a contemporary hotel bar. We walked further and saw that there was a shoot. All the rectangular lights and metal tripods and stuff that say We’re making something fake here. Further still there was a grip fumbling to wrap all of these metal and plastic stands in a burgundy velvet curtain. From a distance it looked like someone was trying to escape, or blind and lost in three square feet of space.